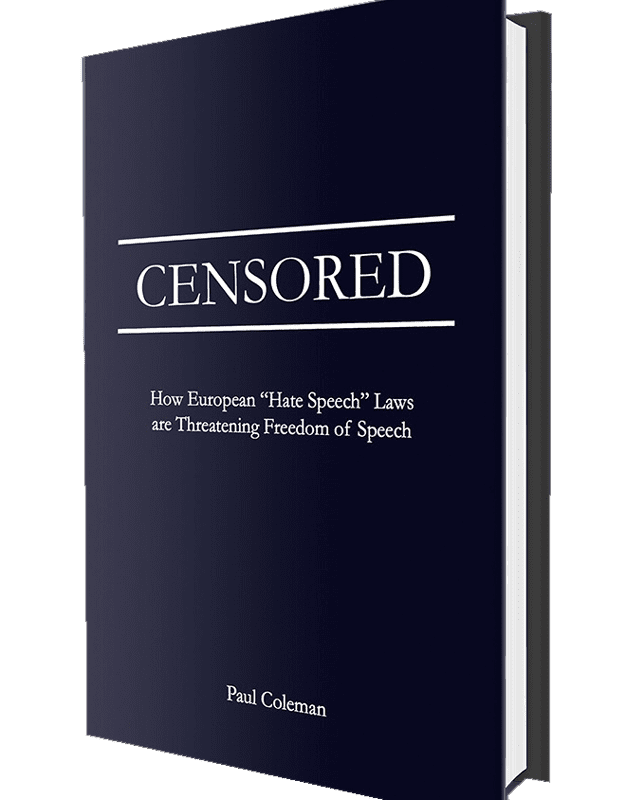 Censored addresses the rise of so-called ‘hate speech’ laws throughout Europe and their devastating effect on freedom of speech.  In Germany, for example, committing an ‘insult’ is a criminal offence and in Poland offending ‘religious feelings’ carries a two year prison sentence. In Cyprus, anyone who promotes ‘feelings of ill will’ may be committing a crime, while in Sweden anyone who expresses ‘contempt’ towards a group of people may be imprisoned. Across Europe, such laws are readily being used. Ministers of religion are arrested for preaching sermons from the Bible, journalists are routinely fined, and even private conversations between citizens can result in criminal investigations. In fact, Censored documents more than fifty different ‘hate speech’ cases throughout Europe, most of which have occurred in the last decade. A fully up-to-date compendium containing hundreds of European ‘hate speech’ laws is included.

Debating Europe: Where should the limits to freedom of speech be set?

Endorsements: ‘Coleman makes a compelling case against the use of hate speech laws.’ -PROF. JÁN MAZÁK, former Advocate General of the Court of Justice of the European Union

‘This brilliant book is essential reading for anyone who cares about freedom of conscience and freedom of speech, and who is concerned about the strangling of these key liberties by politicians passing “hate speech” laws.’ -BRENDAN O’NEILL, editor of spiked online and a columnist for the Big Issue, a blogger for the Telegraph, and a writer for the Spectator

‘Unless a proper respect for freedom of speech is adopted and promoted, we may very well usher in a new era of state-enforced censorship. This book, I hope, will serve as one of the tools in fighting against such a future.’ -BENJAMIN W BULL, Allied Lawyer

London Book Launch Event Photos on Facebook Spiked Event: ‘Should we be free to hate?’

Debating Europe Event: Who should decide what is acceptable online?